In this series, we will introduce you to the experiences of students who had the chance to get to know university campuses abroad. Their knowledge may help you get an idea of ​​what change you would actually like in the Dejvice Campus. Your ideas and comments on the planned revitalization of the campus are still being collected. You can fill in the questionnaire <a href="https://cdn.shopify.com/s/files/1/1932/8043/files/200721_ODSTOUPENI_BEZ_UDANI_DUVODU__EN.pdf?v=1595428404" data-gt-href-en="https://en.notsofunnyany.com/">here</a> until March 31.
If the articles below will at least make you think about Erasmus, we will be very happy about that as well. Studying abroad is one of the best practices a student can choose.

I spent one year at Erasmus in Amsterdam on Vrije Universiteit Amsterdam (VU). As such, the campus is not full of beauty, it is a complex of buildings without a significant architectural intention, with the exception of a single modern building. From the main building of the university, one feels more like a block of flats or, in bad weather, even a prison. Concrete rules everywhere, including the large interior space between the blocks. On the other hand, the campus is very rich, and especially pragmatically equipped. Here you will find a beach volleyball court, pinsch or basketball courts and a climbing wall. When you get hungry, there is a choice of several canteens located in the school buildings, which complement the outdoor mobile stalls with refreshments.

Amsterdam's climate is specific in that it is seldom quite nice, but often the wind blows strongly and strongly. But the locals are used to it, and even on dry dry days they go out with their lunch to one of the many tables and benches. Because the city is full of greenery, the campus environment is mainly used only to spend time between lectures and for lunch. For real relaxation in nature, you would rather drive to one of the nearby parks in a few minutes by bike.

If I were to compare the situation with our campus in Dejvice, at first glance the Dejvický eye is more pleasing to the eye, encourages more time to spend time and in certain places resembles Dutch parks. On the other hand, he lacks the amenities that would bring people here. There is no sports, most places where you can spend time are uncultivated green areas with the absence of benches or coffee tables. You can sit in peace more or less only in the park behind NTK, or in the café Prostoru - NTK, which is also the only publicly accessible place with refreshments in the entire Campus. However, this is far from enough to satisfy all needs, and especially the lack of competition does not create pressure on the quality of the range and services. And even if several refreshment stalls were added here, there would soon be a lack of seating and also the absence of any other activities. If the campus is to live and bring people here, it must first offer something interesting. 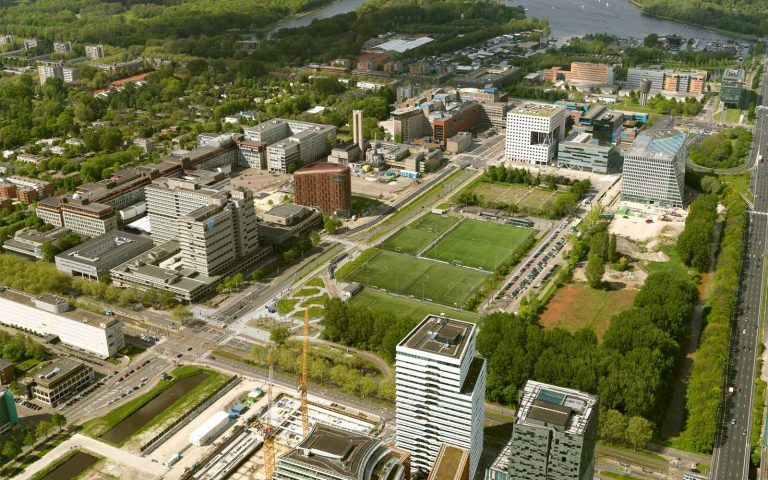 I'm studying architecture at Chalmers for the second year. The university has two campuses. One is more part of the city structure (Campus Johanneberg) built sometime in the XNUMXs, which is part of the city structure. The second, newer (Campus Lindholmen), was built along the river, where it replaced the buildings (or adapted) of the maritime industry. I spend the vast majority of my studies in Johanneberg, where the Faculty of Architecture is located.

The school is private (or not owned by the state), but Europeans do not have to pay for their studies (probably due to the generous subsidies that the university receives, but I don't know much about it). One of the co-owners is the Student Association, and in my opinion this has a lot of effect on the position of students here (compared to, for example, CTU).

Student union house is located in Johanneberg. It includes a shop, auditorium, pub, canteen, swimming pool, sauna, gym, clubhouse, nightclub, etc. The building is open 24/7 as well as most of the buildings on campus. After official hours, it is necessary to use the student card to enter and click on the code. There are no security guys or turnstiles here.

In front of and next to the student house there are two pancakes. Plácek před is a kind of crossroads, where various events organized by students often take place. The plot next door is located in front of the canteen, so we have lunch there on sunny days. It is possible to book a wagon adjacent to this patch and organize events there. In general, there are many spaces around the campus that students can book. E.g. in the building of the Faculty of Architecture there is a pub with a tap in the basement. It is always solved through student associations.

The campus includes a library, several pubs and a climbing wall. Recently, an Academy of Geese with coworking spaces was built here. This building is not primarily for students (it somehow targets all those who are interested). We have recently made extensive use of the space located in this building, which is called makerspace(a kind of workshop). For a small contribution, we can basically spend all our time here, use all the equipment (from 3D printers to a sewing machine) and use a coffee machine (and take fruit).

Many printers are located in the campus buildings. The student pays for the press via printing quota, or an amount used primarily for printing, which can be recharged at any time via the Internet. Files for printing are sent over the Internet, so it's all mega convenient.

The campus boasts sophistication in sustainability and technology. Right in the middle of the campus is Chalmers Power Central, which focuses on energy research and supplies the campus with electricity, heating, cooling and compressed air. In the spring, HUGO, a robot who delivers shipments on campus, is due to move around campus. There are small autonomous buses in Lindholmen, etc.

During the epidemic, teaching takes place online, but the school premises remain open (except for the sauna, etc.), so nothing has changed so fundamentally.

In short, the approach to students here is much "healthier", which is reflected in the life and amenities of the campus. All communication with people from the administration is significantly easier compared to CTU. This makes the campus more lively and the students more engaged.